We are proud to announce the winners of the annual journal awards!

Paul D. Kaufman Memorial Award
The graduating student who has written the most outstanding note for the Law Review

Judge Rose L. & Herbert Rubin Law Review Prize
The graduating student who has written the most outstanding note for the Law Review in International, Commercial, or Public Law

The New York University Law Review will begin considering Articles for the spring selection cycle on February 5, 2019. We accept submissions by Scholastica only. For more information on our selection requirements, please see our Submissions page.

This symposium, held jointly by the NYU Law Review, the Guarini Institute for Global Legal Studies and the Institute for International Law and Justice at NYU School of Law, will examine how law does, should, or can affect data ownership, concentration, and control in a global digital economy. The symposium will take a conceptual approach to the law of data by confronting emerging issues in the global digital economy through analyses grounded in foundational legal concepts such as contracting, torts, property, trusts/fiduciary law, and more specialized areas of international economic law such as antitrust, tax, and trade law. The symposium will not be centrally focused on detailed analysis of intellectual property law or information privacy law, which already occupy a core place in scholarship on data law, although these areas of law may certainly figure where relevant to concepts and regulatory and structural arguments. Commentators with particular additional expertise will enrich the symposium. We are confident that this symposium will make a significant contribution to the foundations of an important and fast-developing field.

The New York University Law Review will begin considering Articles for the fall selection cycle on August 1, 2018. We accept submissions by Scholastica only. For more information on our selection requirements, please see our Submissions page.

The New York University Law Review will begin considering Articles for the spring selection cycle on February 6, 2018. We accept submissions by Scholastica only. For more information on our selection requirements, please see our Submissions page.

Panel One – A Historical and Comparative Look at Nominations Systems

Panel Two – The 2016 Experience: Rules, Parties, and the Media 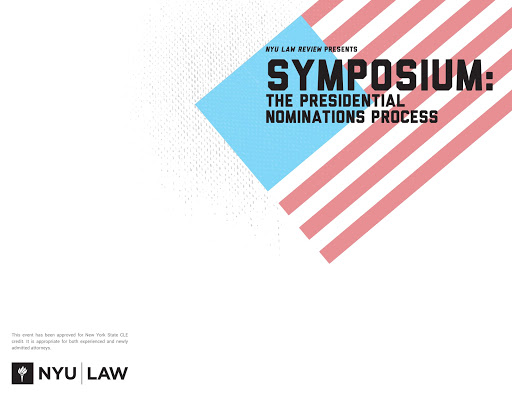 In the 2016 election, two independent political figures—Donald Trump and Bernie Sanders—rose to prominence on strong populist, anti-establishment, and, to some extent, anti-party profiles. One did so with no prior government experience. Yet, for long stretches of our history, these outcomes would have been inconceivable under our presidential primary system. The NYU Law Review’s symposium will examine whether and how to redesign one of the most important features in American democracy: the legal structure through which presidential nominees are selected.

We are proud to publish our April 2017 book, which pays tribute to Chief Judge Judith Kaye of the New York Court of Appeals.

Judge Kaye was a trailblazer as the first female Chief Judge for New York and the longest-serving judge in New York history. Judge Kaye utilized her tenure to reform and modernize the New York courts, and to ensure indigent parties could achieve justice in court.

In a recent op-ed for the L.A. Times, Executive Editor Getzy Berger (’17) discusses the merits of nationwide injunctions. Berger discusses how liberals criticized the sweeping nature of nationwide injunctions for halting President Obama’s executive actions, and how liberals have flipped their arguments as nationwide injunctions halt President Trump’s executive actions. Berger argues that it is a “bedrock principle of the federal judiciary that lower federal ccourts, meaning all courts below the Supreme Court, don’t make nationwide law,” and that the “structure and integrity of our federal courts are more important than the outcome of an individual case or two.” His op-ed is based on his Note, forthcoming in the Volume 92, Issue 4 (October 2017).

In the wake of the 2016 election, a great deal of attention has been directed towards the processes by which we choose presidential nominees. Two independent political figures—Donald Trump and Bernie Sanders—rose to prominence in the 2016 election, each choosing a party to serve as their vehicle for a presidential campaign. Each established a strong populist, anti-establishment, and to some extent, anti-party, profile, albeit offering very different policy perspectives: they emphasized that they would run, and govern, “outside the system.” One, Donald Trump, had no prior elective or government experience, and he emerged from a complex process in which 17 candidates participated, some of whom but not others participated in a series of prime-time debates controlled by media organizations and not the parties. Yet, many Americans might be surprised that, for long stretches of our history, these outcomes would have been largely inconceivable under our presidential primary system.

Although the 2016 election has renewed interest in the presidential nominations process, and the legal structure through which presidential nominees are selected is one of the most important features in the design of American democracy, there has been very little writing in the law reviews on the subject. The New York University Law Review has chosen to host a symposium on the nominations process in order to start an important and timely discussion about the case for redesign of the system and, if so, how. The symposium will examine the historical trends in primary system design, and the role of parties in the nominations process and in the democratic process overall. It will invite debate over different primary structures (closed v. open primaries) and normative questions about the functions of the presidential primary election system, the desirable effects of various designs on voter engagement and participation, and the relative influence and responsibilities of political parties, candidates for the presidency, new forms of political organization such as Super PACs, and the media in our systems of democracy.